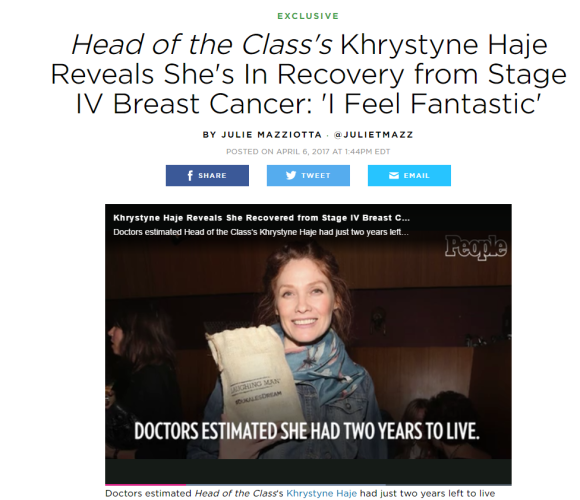 Actress Khrystne Haje was recently featured in a People.com article. The headline elicited much discussion among metastatic breast cancer patients. Written by Julie Mazziotta, the story can be found here: “Head of the Class’s Khrystne Haje Reveals She’s In Recovery from Stage IV Breast Cancer: ‘I Feel Fantastic.'”

Many Stage IV patients took exception to People.com describing the 48-year-old Haje as being “in recovery” and Haje saying “It’s all gone now! Now there’s nothing.”

Stage IV breast cancer is treatable but ultimately incurable. It is likely more correct to say Haje currently has no evidence of disease (NED) but there is no way of knowing the duration of her response. I certainly wish Haje the very best. She mentioned a drug I hadn’t heard of–I wanted to know more. But let’s start at the start.

For people with Stage IV disease, it’s important to know that ILC can have a different pattern of metastasis. In invasive ductal carncinoma, the common sites of metastatic disease are the lung, bones, liver and brain. However, in invasive lobular breast cancer, metastatic disease has been reported in those areas as well as GI tract, peritoneum, and retroperitoneum.

We don’t know what treatment Haje had prior to her metastatic diagnosis or her reasons for choosing a drug currently in the early stages of development.

What treatment did Haje have?  According to People.com, Haje has been given”the SM-88 treatment, which involved simply taking a pill and doing a subcutaneous injection once a day, every day. The treatment is non-toxic, with only minor side effects.” Mazziotta reports Haje “still takes the pills today, almost a year after she first started hearing that the growths were gone, and is hoping that the treatment will be approved by the FDA soon.”

There is nothing to suggest approval is imminent. To date, a Phase 1 trial has been conducted as well as some individual case studies. All told, it appears 25 people with breast cancer have received this drug. As with any drug in a Phase 1 trial,  much work remains to be done.   As many cancer patients know, it can take between 10 and 15 years to develop a drug, at a cost of about US$800 million. For every 5,000 compounds tested, it is estimated that only one will be approved for use in patients. A Phase 2 SM-88 clinical trial for breast cancer isn’t yet recruiting; a Phase 2 trial for prostate cancer patients is open.

Source: A Guide to Cancer Drug Development and Regulation

What is SM-88?  SM-88 apparently combines four drugs (three of which are FDA approved although not for breast cancer): phenytoin, methoxsalen, sirolimus as well as tyrosine isomers. Tyrosine isomers seem to be the secret sauce.  Here is Tyme CEO Steve Hoffman’s March 2017 patent filing on “Tyronsine derivatives and compositions comprising them.”

What is CEO Steve Hoffman’s background? According to biotech analyst David Bautz, Hoffman is an engineer who wanted to learn more about how electromagnetic radiation killed tumor cells.  Bautz further writes: “…tumor cells were viewed to be vulnerable due to the aberrant nature of their metabolism, and mechanisms defined in the literature were invoked both serially and in parallel to attack tumors using already developed agents. Also unusual was the conscious decision to eschew the use of any preclinical models to test the underlying assumptions in animals. Rather, based upon extensive reading and an effective understanding of the medical literature, a theoretical approach was developed to attack and kill tumor cells selectively while sparing normal cells; and this was then tested in people.”

What is the history of SM-88? In November 2011, Luminant Biosciences (the precursor company to Tyme) filed for approval of a clinical trial for SM-88 (then known as SMK) with the Institutional Review Board (IRB) of New York Downtown Hospital. The company enrolled 30 patients with advanced metastatic cancer in the single-center, open-label, proof-of-concept clinical trial between January and December 2012. As is generally the case for a Phase 1 trial, the patient population was comprised of patients who failed all available anti-cancer treatments and had the following cancer types: 14 had breast cancer, four had non-small cell lung cancer, three had pancreatic cancer, two had prostate cancer, and one patient had each of small cell lung cancer, hepatic cancer, tongue cancer, appendix cancer, thyroid cancer, colon cancer, and a cancer of unknown origin. Biotech analyst David Bautz reported that in an affidavit filed Feb 5, 2013 with the US Patent and Trademark Office, Jeanetta Stega, MD, PhD stated the following in regards to the 14 breast cancer patients who participated in the Phase 1 study:

Under an expanded access program, 57 individual case studies were also performed with the approval of New York-Presbyterian / Lower Manhattan Hospital IRB. Of these 57, 11 were breast cancer patients. Among the 11 breast cancer patients,  zero (0) had a complete response, four (4) had a partial response, three (3) had stable disease and four (4) had progressive disease. Source: December 29, 2016 Form 8-K. 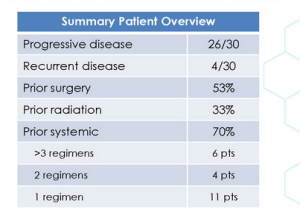 All of the 30 patients in the Phase 1 trial had metastatic cancer and an expected survival of 3 to 6 months. All had either failed or refused all available treatment. Given these facts, I was surprised that 11 patients had only 1 prior systemic regimen. I would have anticipated more.

Who was the principal investigator on the Phase 1 study? Leonard Farber, MD, was the initial investigator. At the time, Dr. Farber was affiliated with New York Downtown Hospital (NYDH), a not-for-profit community hospital, serving lower Manhattan, affiliated with New York Presbyterian Hospital and Weill Cornell Medical Center. According to legal documents,  Dr. Farber applied for and received IRB approval for the study in November 2011. Prior to approval of the study, Farber asked Dr. Jeanetta  Stega for help in developing the protocol and patent application for the Luminant study. Dr. Stega, a research scientist  with NYDH participated as the principal investigator in numerous medical studies; was promoted to Vice President of Research; and became Chairperson of the Hospital’s Internal Review Board (IRB). (She recused herself from voting on Dr. Farber’s application.)

In 2012, Dr. Farber complained he was not receiving enough money from Luminant. He accused Stega of taking money from Luminant that he should have received, and resigned from the Luminant study. Dr. Stega then sought treatment for the study’ s patients from the NYDH and Luminant requested that NYDH take over the study.

A Phase 1b/2 trial for prostate cancer is enrolling patients. A trial for pancreatic cancer is next. There are ongoing investigator initiated trials (IIT) at Mount Sinai, Mayo Clinic, Medical College of Wisconsin, University of  Rochester and Albert Einstein College of Medicine.

What did I learn?

Things are seldom as simple as they may appear.  People.com is a great source of celebrity dish but not necessarily a credible source of cancer treatment news.  I gained new appreciation for Dr. George Sledge’s “Maxims for Cancer Researchers.”

“Quantity has a quality all its own,” asserts Dr. Sledge. “The scientific literature is mostly crud. This is true both in the lab and the clinic. Lack of reproducibility is endemic. One of the major reasons for this is the curse of small numbers: cell line experiments that use only one cell line (rather like treating a single patient and expecting to discover a universal truth), animal experiments with a few lonely mice, clinical trials with suspicious ‘descriptive’ statistics. Small numbers studies are particularly prone to overcalling results, and we, lemming-like, follow them over the cliff in our ever-recurring credulity.”

Last year, I heard a presentation where a new combination therapy was said to have an 89 percent response rate. Translated into English this meant that, in a preliminary, unaudited analysis, eight of nine patients had shown initial signs of response. The next time I heard the study presented (more patients, longer follow-up, external review of results) the response rate had dropped to 54 percent. Still respectable, but not the second coming of the Salk vaccine. Quantity has a quality all of its own.–Dr. George Sledge, Maxims for Cancer Researchers

© Katherine O'Brien and ihatebreastcancer, 2011. Unauthorized use and/or duplication of this material without express and written permission from this blog’s author and/or owner is strictly prohibited. Excerpts and links may be used, provided that full and clear credit is given to Katherine O'Brien and ihatebreastcancer with appropriate and specific direction to the original content.
Loading Comments...
%d bloggers like this: