Kudos to Julia Belluz, Brad Plumer, and Brian Resnick for their wonderful July 2016 Vox article, “The 7 Biggest Problems Facing Scientists According to 270 Scientists.” As one of my nephews would say, “Nailed it!” 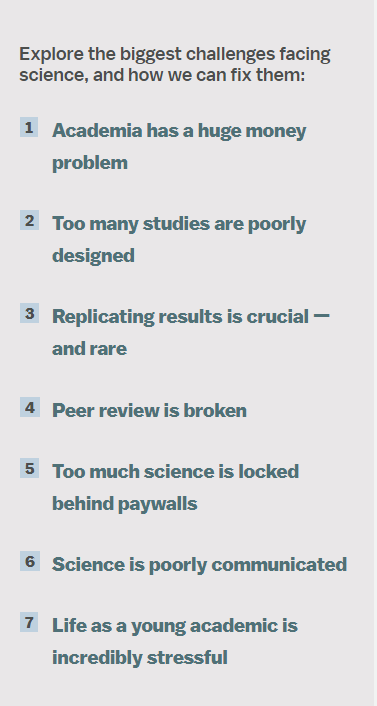 The authors surveyed  270 scientists all over the world, including graduate students, senior professors, laboratory heads, and Fields Medalists. In a nutshell, they learned  that scientists’ success often isn’t measured by the quality of their questions or the rigor of their methods. It’s instead measured by how much grant money they win, the number of studies they publish, and how they spin their findings to appeal to the public.

Here are some of the seven points that really resonated with me, a woman living with Stage IV breast cancer who is relying on research to help me–or failing that–my family, friends and well, everyone. Please note that these points as I am relaying them are in reverse order of importance.

WHERE ARE THE CELEBRITY MOLECULAR BIOLOGISTS? Point No. 6  hit home for me: Science is Poorly Communicated to the Public. “If I could change one thing about science, I would change the way it is communicated to the public by scientists, by journalists, and by celebrities,” writes Clare Malone, a postdoctoral researcher in a cancer genetics lab at Brigham and Women’s Hospital.

Amen! The general public has no idea that breast cancer represents something that went wrong at the cellular level. It is not a punishment for eating too much sugar or too little kale. It is not God’s way of sending you a wake-up call. It means that something has gone wrong with some of your 30 trillion cells and they are growing out of control. The onset and progression of cancer is due to multiple dysregulated proteins and cellular pathways.

But according to musician and amateur molecular biologist Melissa Etheridge, “Cancer is just a symptom of our bodies being out of balance and the cure is to understand health. It’s to understand our bodies and our spirits—our souls—better. That’s the cure.”

Melissa Etheridge was diagnosed with Stage 2 breast cancer in 2004. She had a lumpectomy, 15 lymph nodes removed and then  five rounds of chemotherapy and radiation. Apparently this is the basis of her expertise.

In her spare time, Etheridge dabbles in genetics, too.  In a 2015 she told AARP: “I have the BRCA2 gene but don’t encourage women to get tested. Genes can be turned on and off. I turned my gene on with my very poor diet.”

The article drew the ire of many, including a non-profit that advocates for those with hereditary breast and ovarian cancers. “Everyone is born with two copies of both the BRCA1 and BRCA2 genes, which play essential roles in preventing cancer,” wrote Sue Friedman, executive director and founder of FORCE. ” Individuals born with a change or mutation in one of these genes bear a higher lifetime risk of breast, ovarian, and other cancers than those without a mutation not because the gene is ‘turned on’ but because they lack a working copy of one of the genes involved in preventing cancer development.

Attention journalists–some celebrities are knowledgeable about their conditions–but please give some thought as to how these influential figures’ words and actions will be received. Angela Jolie, for example, seems well-informed about why her personal family history made a prophylactic mastectomy and oophorectomy a logical choice–for HER. However, please take the time to point out that MOST cancer is NOT hereditary–90 percent of ALL cancers  are considered sporadic, meaning they just happen. So in other words, the vast majority of us–in looks or genes–are not like Angela Jolie at all.

Another plea: Please remember those who won’t “kick cancer’s ass.” It’s not like we did something wrong or we didn’t try hard enough or we blew off doctors’ appointments. We are living with a chronic, progressive and ultimately fatal disease. Don’t treat us like losers or pretend we don’t exist. Think outside your pink ribbon expectations.  Breast cancer is second only to heart disease and lung cancer as the leading cause of death in women. Where are your lung cancer special sections? Pancreatic cancer is a devastating diagnosis–there is no early detection for this disease. Like ovarian cancer, it is a silent killer–where are those stories?

As someone living with the fatal form of breast cancer, I am so tired of self-appointed experts–celebrity and other wise–expounding upon a disease that they know little about. I am a member of United Airline’s MileagePlus program. I have been a passenger on many flights.  Amazingly, I have no insights on the science behind keeping a plane aloft, how to fly a plane or the latest pilot union grievances. Journalists: When interviewing a celebrity, please ask yourself, “What makes this person an expert? What is their understanding of basic human biology let alone the disease in question?”

MUST BE THE MONEY–the authors noted that US academic researchers need outside grants to pay for their salaries, assistants, and lab costs.  University funding is paltry–many faculty are expected to cover at least 75 percent of their salaries with grant money. Grants typically expire after three years–far too short a time to supply the kind of research needed for meaningful results in studying metastatic breast cancer. Research can take decades.

Our federal government is the largest source of cancer research funding and as Vox reports, “that pool of money has been plateauing for years, while young scientists enter the workforce at a faster rate than older scientists retire.” You can bash all the breast cancer non-profits all you want for funding more “awareness” than research. But where are the protests, the outrage over the federal government slashing research funding? The Moonshot is all well and good, but it can’t eradicate YEARS of federal penny-pinching and indifference when it comes to research. As Belluz, Plumer and Resnick observe:

Take the National Institutes of Health, a major funding source. Its budget rose at a fast clip through the 1990s, stalled in the 2000s, and then dipped with sequestration budget cuts in 2013. All the while, rising costs for conducting science meant that each NIH dollar purchased less and less. Last year, Congress approved the biggest NIH spending hike in a decade. But it won’t erase the shortfall.

The consequences are striking: In 2000, more than 30 percent of NIH grant applications got approved. Today, it’s closer to 17 percent. “It’s because of what’s happened in the last 12 years that young scientists in particular are feeling such a squeeze,” NIH Director Francis Collins said at the Milken Global Conference in May.

James Watson was 25 years old when he co-discovered the double helix structure of DNA in 1953. Watson benefited greatly from the work and mentorship of older colleagues. Where are the James Watsons, Frances Cricks and Rosalind Franklins of 2016? Sadly, they are probably going into more lucrative fields–and they probably aren’t staying the US, either.

There is actually a non-partisan group dedicated to  “seeking the immediate restoration of funding for NIH followed by steady, predictable budget support in the future to enhance lifesaving research for patients around the world.” Medical research in the United States is in crisis according to ACT for NIH. “Adjusted for inflation, NIH receives nearly 19 percent less funding than it did in 2003. Because of this decrease in funding, NIH must reject research proposals that could lead to future discoveries of cures and treatments for cancer, Alzheimer’s, heart disease, stroke, diabetes, and other diseases. Our brightest young scientists are turning to other careers, and  other countries now threaten our global leadership in biomedical research.”

Again, where is the groundswell of outrage?

PUBLISH OR PERISH–Researchers are under enormous pressure to publish–unfortunately, the need to amass credentials can sometimes lead to the publication for the sake of publication–we end up with white-bread-and-mayonaisse studies that will ultimately help no one–except the authors’ careers. Metastatic breast cancer research creeps along at a tortoise-like pace–meanwhile these MBC researchers are being lapped by hares, eager to advance their careers. Sometimes researchers–perhaps even unconsciously–may create studies that are heavy on hype but slim on actual meaningful results. Says Vox:

The consequences are staggering. An estimated $200 billion — or the equivalent of 85 percent of global spending on research — is routinely wasted on poorly designed and redundant studies, according to meta-researchers who have analyzed inefficiencies in research. We know that as much as 30 percent of the most influential original medical research papers later turn out to be wrong or exaggerated. 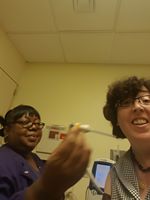 I was diagnosed with MBC in 2009. Over that time, US  cancer research funding dropped by about 20 percent. Come on! We’re counting on you, Congress! Give NIH the support it needs!

I am proud to be a board member for the Metastatic Breast Cancer Network (MBNC). We are a founding member of  the Metastatic Breast Cancer Alliance (MBCA). The Alliance is led by advocates and, since forming with 15 groups in October 2013, has grown to be the largest breast cancer alliance in the U.S. with more than 40 of the leading cancer charities, advocacy groups and individuals and pharmaceutical industry partners represented. The Alliance is working to address all of the above questions. This work is hardly glamorous–there are many meetings, conference calls, committee work and countless hours spent writing and reviewing documents and other tasks. Most members of the Alliance are busy with their regular job duties–as someone living with the disease, I am beyond grateful for their efforts. As you can tell from the Vox article, we have our work cut out for us.  It’s not easy, but we are making a difference and will continue to do so!

© Katherine O'Brien and ihatebreastcancer, 2011. Unauthorized use and/or duplication of this material without express and written permission from this blog’s author and/or owner is strictly prohibited. Excerpts and links may be used, provided that full and clear credit is given to Katherine O'Brien and ihatebreastcancer with appropriate and specific direction to the original content.