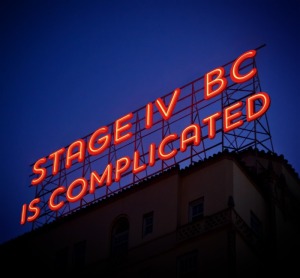 st cancer is and how it is treated.

Keller is writing about Lisa Bonchek Adams–a 40-something woman with MBC who tweets and blogs her experiences with the disease (as well as humorous tidbits about her kids, dog, etc.).   While it is true that Adams was diagnosed with early stage cancer seven years ago, she has not been in a seven-year “public cage fight with death,” as Keller writes.

Keller’s editorial suggests that Adams is somehow pulling out all the stops with her metastatic breast cancer treatment. This isn’t true–Adams is getting standard of care–the same as any of us would get. She did enroll in a clinical trial (and washed out of it) but it was NOT the last-ditch effort Keller paints it as–she still has some arrows left in her pharmaceutical quiver.

As Adams correctly told Keller, the course of the disease can involve many periods of relative stability, interspersed with serious complications and side effects. To live with MBC is to embrace uncertainty—you don’t know if a drug will work, how long it will work and how you will tolerate it. You just take it one day at a time. There is no wrong or right way to live with metastatic breast cancer–there is only the way that works best for YOU.

As someone with MBC, Keller’s ignorance of the MBC facts of life is frustrating. I hope this video will set people like him straight:

….and here’s the MBCN blog I collaborated with Ginny Knackmuhs on:

ETA: For those looking for the PowerPoints featured in the video:

© Katherine O'Brien and ihatebreastcancer, 2011. Unauthorized use and/or duplication of this material without express and written permission from this blog’s author and/or owner is strictly prohibited. Excerpts and links may be used, provided that full and clear credit is given to Katherine O'Brien and ihatebreastcancer with appropriate and specific direction to the original content.
Loading Comments...
%d bloggers like this: